Since becoming the sixth president of the University of New Haven in 2004, Steven H. Kaplan has created a bold vision for the University, leading it through a period of remarkable growth and development. Thanks to his inspired — and inspiring — leadership, the University of New Haven now ranks among the top universities in the Northeast and boasts nationally ranked programs in a number of majors across business, criminal justice, engineering, forensic science, and the liberal arts and sciences. Under his leadership, enrollment has grown more than 60 percent to 6,800 undergraduate and graduate students, hailing from 47 states and some 57 countries. Full-time undergraduate enrollment has more than doubled, and first-year applications have nearly tripled. Over the last decade alone, the University has completed $300 million in construction projects and has launched 26 new academic programs. Refusing to rest on his laurels, Dr. Kaplan in 2016 spearheaded the creation of The Charger Challenge: The Campaign for the University of New Haven. Launched as a precursor to the University’s historic centennial in 2020, The Charger Challenge endeavored to raise $100 million to help shape the University’s next 100 years. The centerpiece of the comprehensive campaign is the new Bergami Center for Science, Technology, and Innovation, a state-of-the-art academic facility that is scheduled to open in early 2020. On April 2, 2019, the University announced that the campaign had exceeded its original goal more than 18 months before the conclusion of its centennial year. President Kaplan increased the goal to $120 million by the end of 2020. In 2015, in recognition of his many achievements, Dr. Kaplan was presented with the Chief Executive Leadership Award by the Council for Advancement and Support of Education (CASE) District I. He also was named "Businessman of the Year" by Business New Haven magazine in 2008. Dr. Kaplan began his teaching career in 1982 as an Instructor of English at the University of Maryland, European Division. From 1985-1989, he served as Visiting Lecturer in American Studies at Eberhard-Karls Universität, Tübingen, Germany – one of the oldest and most highly regarded universities in Europe. After completing his doctoral studies at Eberhard-Karls Universität, he returned to the U.S. to teach English at the University of Southern Colorado. Within only three years, he was made department chair, serving in that capacity for two years before becoming Director of the Center for International Studies. 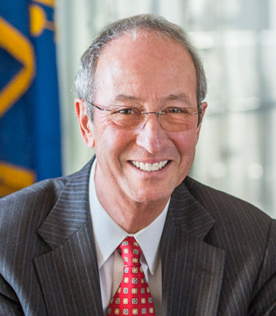